Mark Zuckenberg is the youngest billionaire due to the huge success of his social network, Facebook. Imagine that the money received from various sources isn’t owned only by him and his staff, but shared with all the users, how would this be? Much more, depending on how much you initially invest into a social network, you will receive proportionally an amount of money as profit. These ideas sound as a strange story, but sooner it will become the reality of our days.

Zurker is a fabulous project, still in testing, that promises a new approach related to the development of social networks. The actual giants of social networks are on the apogee and people are searching for something new. Here is the brilliant idea of Zurker, it brings a totally innovative solution and at the same time, strongly encourages the active participation of the users. Let’s see which the advantages and the novelties of Zurker are:

Yep, it isn’t a bad joke; by buying vShares anyone will receive real money when the users will decide the capitalization of the network. The amazing features and the fundamental concepts behind it make any trader consider the investment in this a real bargain, hence it is better to pay great attention to this modality of making some money.

2. You decide the faith of the network

This is another unexpected but promising feature, the democratic modality of establishing the evolution of the network. The team that developed the network states that once it brings a decent amount of users all the decisions are based on the democratic participation of the users. Surely, there will be a lot of issues and many people unsatisfied but the principle is great and anyway, there is no other better way.

Apparently it isn’t something new, but there are frequently issues about the security of accounts. While some people don’t care too much about their privacy some are very careful with this. In order to prevent any problems, the Zurker project offers full control over the account. I am waiting to see how this problem will be resolved; if they find the proper solution then surely it will attract many new users.

4. Everything is transparent and democratic 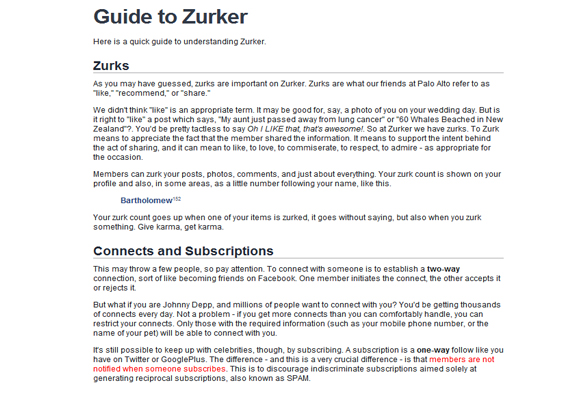 Previously I mentioned the democratic character of making decisions, but there is more than that. Everything is transparent, any dollar spend in making the website is published, the entire strategy of developing is shared with the users; therefore it is improbable that Zurker creators will hide something from the users.

Some people lost their job because the information shared wasn’t liked by their bosses or simply considered it as an offense and the revenge was nothing more than the firing of the accounts owners. Zurker offers the possibility of creating an account with no real name and under these circumstances it’s more difficult to be detected (clearly, you may expose your name, depends on your own decision).

These are only a part of the great ideas that are the base of this very promising network, let’s hope that the near future will bring us the full version of it and why not, to become richer by simply interacting on Zurker.

Get your Shares on Zurker now