I admit I was ready to stop writing and reading about Facebook, but I came across a study that claims your number of Facebook friends might correlate to the size or your brain. I simply could not resist. According to a study completed at the University College of London, people with lots of Facebook friends have a higher brain density than those with few Facebook friends. As someone who has 400 Facebook friends (and believe it or not, this is significantly less than many on 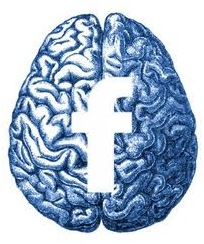 the site), I needed to know if I was doing my brain a disservice.

After looking further into the site, I discovered that this is more than just a question about brain size. This study is simply a stepping stone into more complicated sociological and neurological studies. Could Facebook actually be changing the brain? Do people born with different kinds of brains behave differently on social networking sites? Consider the evidence for yourself:

There is no doubt that those who are more comfortable in social situations have larger sections of the brain, but the same might be said for those who are very good at math or those who have any other particular talent (note: I am not a scientist or researcher; this could be untrue!). Regardless, the question about whether or not social networks are changing the brains of humans is an interesting one to ponder.

What about the person who is very shy around his/her friends, but online they are the most popular kid around? If an individual can figure out how to work social media and stay involved, they could potentially create an account that generates a lot of activity; a lot of friends. Yet, I cannot help but think that this is not really who this person is. Or is the person themselves when they are online, and not when they are face to face with other people? This is where studies on the brain come into play. What are your thoughts?

Amanda DiSilvestro is a writer on topics ranging from social media to employee background checks. She writes for an online resource that gives advice on topics including business phone systems to small businesses and entrepreneurs for the leading B2B Directory, Business.com.